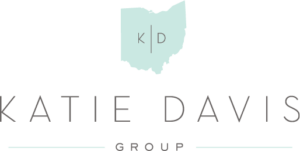 KATIE DAVIS SPENCE – Katie received her real estate license shortly after graduating from Indiana University in 2007 and moving back to Upper Arlington, where she grew up. As a longtime resident of Columbus, Katie is extremely knowledgeable of the central Ohio market.

Despite a down market and the fact that she was new to the job, she was quickly able to translate her hard work into results. Katie believes much of her success is attributable to her persistence and determination, her meticulous attention to detail, her ability to see all that she takes on through to the end, and her excellent communication skills. In the years since, Katie has represented buyers and sellers all over Columbus.

Katie was named a 2014-2020 Five Star Real Estate Agent which is a service-based award nominated by clients and also based on performance and results. In 2015 Katie was also named a “Top Ten Under 40” Realtor in Central Ohio. She is also a 2015-2016 graduate of the Columbus Realtors Leadership Academy. Katie served as the 2016 Vice President and 2017 President of the Northwest Area Realty Association serving the Grandview and Upper Arlington areas.

When Katie is not helping people track down their perfect home or marketing and selling their current home, Katie finds fulfillment in her membership and active participation in various volunteer opportunities. She also enjoys traveling, reading, working out, and spending time with family, friends and her miniature Yorkshire Terrier, Cooper.

AMY DAVIS IRETON – Amy Davis Ireton grew up in Upper Arlington, went to St. Agatha for elementary and middle school and graduated from Upper Arlington High School. After graduation, Amy went to Ohio University in Athens, Ohio where she majored in Organizational Communication. She moved to Chicago post-college where she worked in corporate event planning for six years. After six years away, it was time for Amy to leave her windy city life and move back to Columbus. With Amy’s magnetic personality, her attention to detail and love for being on the go, real estate was an industry that fit her perfectly.

After learning from her sister (and one of the top realtors in the area), she was able to quickly jump in and gain the knowledge and skills required to represent both Buyers and Sellers. Amy has worked in areas all over Central Ohio, including; Upper Arlington, Grandview, Victorian Village, Harrison West, Merion Village, German Village, Olde Towne East, The Short North, Downtown, Worthington, Dublin, Hilliard, Powell, Lewis Center, Gahanna, Grove City, Westerville, Galloway, Pickerington, New Albany & more. Amy currently resides in Upper Arlington with her husband Andy and son Charlie. When she is not busy selling houses, she enjoys spending time with her family and friends, adventures, hitting up farmer’s markets, helping people plan weddings, traveling and volunteering. Amy definitely stays active, that’s for sure!